Gareth Ward, a.k.a. The Great Wardini is a magician, hypnotist, storyteller, bookseller and author. He has worked as a Royal Marine Commando, Police Officer, Evil Magician and Zombie. He basically likes jobs where you get to wear really cool hats. Born in the town of Banbury in the UK Gareth currently resides in Hawke’s Bay, New Zealand where he runs two independent bookshops with his wife Louise and son Max. His first novel ,The Traitor and the Thief, a rip-roaring young adult Steampunk adventure, won the 2016 Storylines Tessa Duder Award, the 2018 Sir Julius Vogel Award for Best Youth Novel, a 2018 Storylines Notable Book Award and was a finalist in two categories at The New Zealand Book Awards for Children and Young Adults. The sequel, The Clockill and the Thief is out now.

Lizzie is an avid reader and a lover of stories. In her working life she runs Tennyson Gallery, writes for BayBuzz magazine and works on events including the Wildflower Sculpture Exhibition and Pecha Kucha in the Bay. She holds an MA in Creative Writing from Victoria University’s IIML. 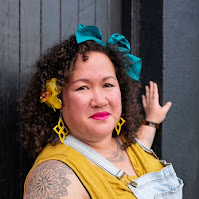 Jess Soutar Barron is a community enabler with a number of hyperlocal initiatives under her belt including project managing talk fests and craft markets, writing for magazines and websites, producing arts projects, facilitating events and setting up pop-up shops. She holds of Master of Arts degree, is a wordsmith by trade and works alongside her husband running a neighbourhood bar in The 'Stings. She sits on the boards of the National Youth Drama School and Taikura Rudolf Steiner School. Jess is a wannabe children's writer and has enjoyed fledgling success with the publication of her story Pot Belly Brown Queen of the Muttonbusters.