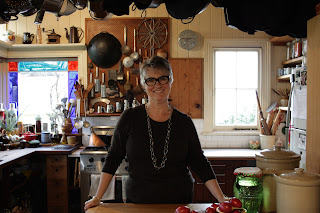 Alexa Johnston grew up in Auckland, the middle daughter of Malcolm Johnston, a Presbyterian minister and Paula Johnston, a primary school teacher, both of whom gave cheerful encouragement to her early interest in baking and cooking.

After completing an M.A. in Art History in 1978 Alexa spent 19 years as a curator at Auckland Art Gallery Toi o Tamaki. She is now an independent writer and curator and in 2002 was curator of the exhibition Sir Edmund Hillary: Everest and Beyond for Auckland War Memorial Museum.

Her authorised, illustrated biography Sir Edmund Hillary: An Extraordinary Life was published by Penguin in 2005.

Alexa has written three books paying tribute to the skills of earlier generations of home cooks: Ladies, a Plate, A Second Helping and What’s for Pudding? A fourth book in the series, Ladies, a Plate: Jams and Preserves will be published this year. Alexa makes and tests all the recipes for her cook books – and takes all the photographs – in her home kitchen in Auckland.
Newer Post Older Post Home